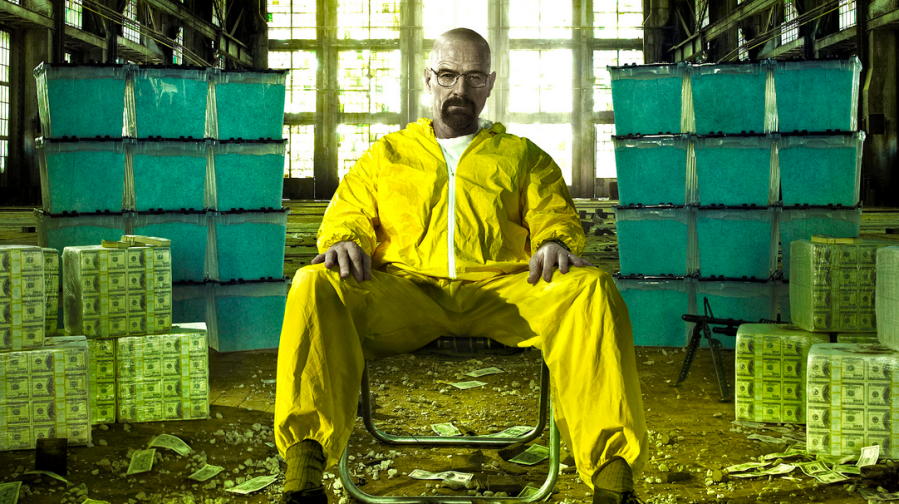 [This article contains spoilers for Breaking Bad Seasons 1-5 and Legend of Korra Seasons 1-4, as well as sort of loose spoilers for Avatar: The Last AirBender Seasons 1-3 and Star Wars]

Breaking Bad and Legend of Korra on the surface have almost nothing to do with each other.  One is a live action show about drugs and dangerous people that my dad got addicted to and couldn’t stop watching no matter how sick it made him (true story). The other is a cartoon about people with magic powers and a hairy, many-legged flying bison.  But both of them exemplify something that has, in my opinion, faded significantly from modern day narrative media.  They’re both interested in falling action.

I’m not going to get all academic about why falling action has disappeared from storytelling in a major way.  I really don’t know the reason for it, except the misguided notion that it’s not particularly exciting to watch.  Which, in fairness, it’s not exciting in the same way as everything leading up to the climax.  Blockbusters have probably contributed heavily to the decline of falling action.  Let’s talk Star Wars real quick:

There’s no real interest in how the climax affected the characters.  And it makes sense in the modern age of sensational movies.  Bigger explosions, more superheroes, bigger set pieces… falling action doesn’t contain any of this, so why waste screen time on it?  It’s spread to dramas as well.  The astounding final scene of Whiplash is the climax, and the movie gives us absolutely nothing past that point.

It’s a shame for two reasons.  Firstly, falling action can be and often is the best part of a story.  Secondly, reducing the falling action is self-perpetuating – the less people see it, the more boring they find it, the less it’s included, etc.

I often hear from friends that the fifth season of Breaking Bad and the fourth season of Korra a.k.a. their “falling action” seasons are much less enjoyable/beloved than their fourth and third seasons (respectively) a.k.a. their climatic seasons.  I think both shows handle falling action perfectly, and each would be a much lesser story without their final seasons.

Breaking Bad’s fourth season ends with Walter White breaking bad.  He is the one who knocks.  He plants a bomb on Papa Bell Ringer and blows up half of Gus’ face so that Gus resembles a teddy bear in a pool.  He has finished rising to power.  His story could easily be “over” at this point.  The “big bad” is dead and Walter White is as transformed as he is going to get.

So: how should we view the fifth season?  If his character’s story is over, what can be done?  Isn’t that all a story is?

Walter’s transformation may be completed, but his story isn’t.  Walter White has been ascending, but he has so far to fall.  His drive throughout the whole show has been to make something of himself, to become something to either be loved or feared.  Having achieved this goal he is left without any plans to actually maintain this position – in ascending he inadvertently ripped the rug out from under himself.  Gus had a whole structure built to maintain his empire, and Walt is unable to simply step in and take control of it.  He has unraveled too much.  He is forced instead to make a pact with the devil (Todd and his family).  Walter is likewise haunted by past actions he used to achieve his power (Jesse, Hank, his family).  The climax is his transformation to total villain, but the story continues after that turn.

We need to see the empire fall, and need to see how this character who has finally become their final form deals with the fall out of their own actions.  Breaking Bad argues that you can take actions, and you can break bad, but those choices will have consequences and cutting off the consequences would make it a radically different story.

Korra takes a similar approach.  Like Breaking Bad, the big blow out has already happened.  Season 3 deals with the enormous threat the Red Lotus poses – total world anarchy and the end of the Avatar.  Season 4 deals with a much smaller threat: Kuvira’s campaign to usurp the Earth King and become dictator of the Earth Kingdom.  Like Breaking Bad, the final season deals with the fallout of penultimate season in a way that reframes the penultimate season while making its message more profound.

Like in Breaking Bad, where Walter White is his own undoing, Kuvira is inadvertently Korra’s fault.  Unlike Walter White Korra is not done growing.  She was able to defeat the Red Lotus, but she is deeply damaged by it, and the world around her reflects this damage both in her shadow avatar (a physical embodiment of her PTSD) and the scarred Earth Kingdom that she was not there to repair after the Red Lotus removed their previous leader.  Even the power that Kuvira develops (the show’s equivalent of nuclear weaponry) is only possible because Korra made the decision to leave open the spirit portals in Season Two.  Season Four deals with the fall out of all that tribulation, and all those decisions.  The climax has already passed, but now Korra needs to pick up the pieces, move forward, and decide what to do with herself.

The final season allows other characters to deal with the fall out of their actions as well.  Zaheer is the former leader of the Red Lotus and the person responsible for both Korra’s PTSD and the Earth Kingdom’s power vacuum.  He too has some reframing to do.  If the show skipped the falling action – if it were an action movie – Zaheer and Korra would already be done with each other.  Their fight at the end of Season 3 is the big blow out of the show, with the two most powerful fighters coming toe-to-toe – it is the climax of Korra’s growth as a “powerful fighter”.  Kuvira is not as evil as Zaheer, nor is she is not as powerful.  But she can reframe the progression of the show thus far.

By allowing Korra to return to Zaheer, the show forces him to deal with the consequences of his actions.  Zaheer always imagined himself as a liberator, and knowing that his actions created a tyrannical leader who is harming both the people and the spirits he decides to ally himself with Korra and help her move past her PTSD.  Both Korra and Zaheer tried to implement what they thought was right by force, and it cost them both dearly.  By placing them both in a final season, we get to see them grapple with the question: what next?  How do I move forward?

Isn’t that the most important question in a story, or in life?  It’s not how you are at your best, or your worst, or at your most volatile and explosive moment, but how you behave afterwards that really matters.  If the last time we saw Walter White he was on top of the world at his most sinister, we wouldn’t see how the new Walter White deals with his world falling apart.  We wouldn’t get to see what he chooses to do with his back against the wall, with everything crumbling, when he is forced to answer for himself.  If we saw Korra broken after beating Zaheer and saving the world and left her then, we’d be robbed of getting to see her make an even more powerful choice, the choice to face an old enemy and find what is good in them, and to show Kuvira peace instead of war.  By cutting falling action from movies and television the writers, directors and producers are failing to tell whole stories.  They aren’t showing us the most important part, which is how the characters deal with themselves after the “action” is over.  And that’s a terrible thing to lose.

2 thoughts on “Why We Need Falling Action: Breaking Bad & Korra”