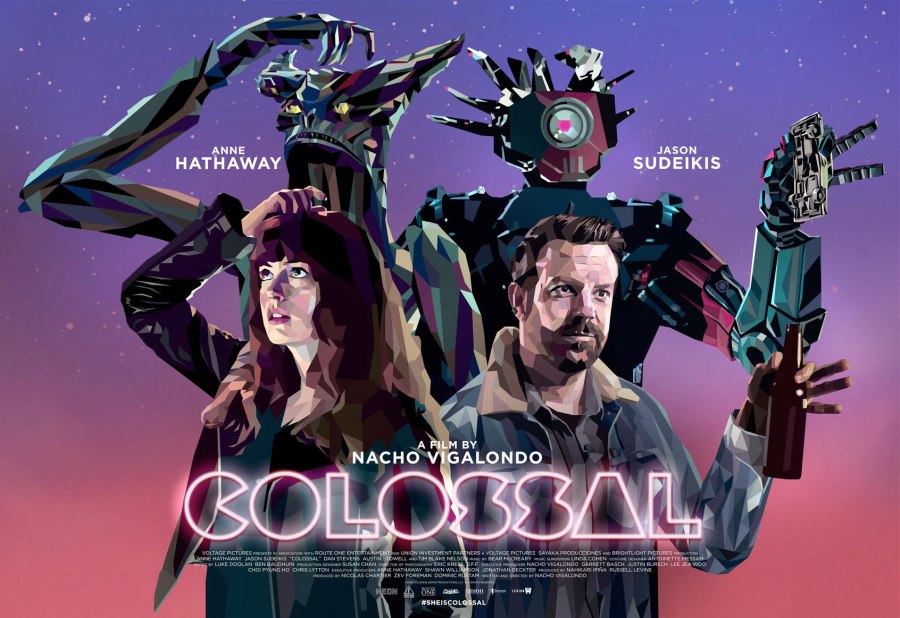 May 13, 2017 Author by Brian RussellPosted in Current Reviews

Explanations ruin perfectly good stories. This problem trashes The Matrix 2 and 3, The Star Wars Prequels and Star Trek V’s search for God. I hope against hope that Blade Runner 2049 does not fall to this crushing disease. Colossal’s director Nacho Vigalondo never insults us with stupid explanations, but helps us see the unintended consequences of our actions on the world. And how we can stop the madness.

Colossal opens with dysfunctional alcoholic Gloria (How can anyone hate Anne Hathaway in this impossible but totally believable role?) as she hides out in her parents abandoned home while she tries to figure out her life. Jason Sudeikis plays her childhood friend and admirer Oscar … at first helper and protector, and then later — let’s say we all need to watch out for this guy. Sudeikis is the dude we know from countless comedies, but he also gave me chills, transforming into a frightening abuser. Crazy often looks silly.  Not behind Sudeikis’ eyes.

Vigalondo takes this familiar and over-done topic and does what nearly every filmmaker dreams of accomplishing. He offers a traditionally — even stereotypically —  broken protagonist but then turns it all on it’s head and makes it beautifully fresh.  Instead of witnessing the horrible drunken night, or the crashed car, or the lost kid, he skips all that and let’s us discover what is happening as Gloria navigates the murky path of blackout reconstruction. And instead of telling us what to think about Oscar’s weird overly helpful savior to Gloria, he let’s us sit with Gloria’s own lost and confused consciousness as we figure out just what is going on here.

Early on a Godzilla-like monster appears in Seoul and terrorizes the city. Through Gloria’s alcohol-induced amnesia she struggles to make a connection to the terror she sees on the TV and computer screens, and the impossible reveals itself to her. Hathaway puts the pieces together in a way that feels completely believable, but honestly is absurd. Both of the leads in this film offer performances that showcase great acting … a look, a twitch, a turn of the eyes.

We already know Hathaway is a great actor, but I’ve never taken Sudeikis very seriously and I have always assumed I wouldn’t like him if I met him. This is based on nothing other than he reminds me of a middle school funny guy who used to torment me. Oh, and the fact that he seems to play the exact same role in every single movie. But keep an eye on this guy … he might just have the chops to go from schoolyard bully to worldwide force.

Gloria’s character begs comparison to Rachel Getting Married, an earlier Anne Hathaway movie in which she brilliantly plays Kym, another drug addict. This should be a natural connection, right?  But no … here she is someone else.  Kym’s way out is to embrace her past, and accept the demons that haunt her.  Suffering from the same affliction perhaps, but Hathaway has shed Kym and become Gloria. The path out for Gloria is nothing like the path out for Kym. And almost no words are spoken as Gloria stands up to both her disease and the meanness in the world.

In lesser hands I would have been rolling my eyes inside of five minutes, but Hathaway and Sudeikis make this genre-warping film a personal experience that forces me to examine my own role in the greater world.

As Gloria realizes that she IS the monster, she comes to understand it is up to her to fix the problem. The problem she sees is literally half a world away from her, but she knows her actions are creating horrible consequences. Gloria’s awakening — her connection to this monster — not only helps her understand the problem with unintended consequences when it looks like things are happening “over there,” but becomes a visceral, tangible metaphor for her own addiction, and a wake up call to her own power to take care of herself.

This film shines as an example of show don’t tell. Given that it feels a bit Mumblecore in it’s performance and dialogue style (a compliment in my book) the movie somehow manages to reveal what is going on inside of these people. Stories like this one often tell us what is going on; the characters state their thoughts and feelings out loud.  But this film lets us see inside these people.  We see and feel the struggle.

Gloria ultimately discovers that we choose who we become as humans, and learning that being good to self and being good to the world are not mutually exclusive. Living through our own stories can be hard and exhausting. But maybe sometimes we can learn from someone else instead of our own stubborn mistakes. Gloria and Oscar may be just the lesson I needed.

I give this wonderfully weird and twisty film a must-see 9 out of 10 on a traditional grading scale.

Brian Russell grew up loving super-hero comic books, TV and movies. Star Trek, The Six Million Dollar Man, and Planet of the Apes were his favorites as a kid. He still loves all that cool sci-fi stuff, but now spends about half his screen time with Classic Films. Film Noir is his favorite genre in that realm. He is a Director of Photography with credits ranging from an ESPN 30 for 30, to celebrities like Arianna Huffington, Ed Burns and the entire cast of Saturday Night Live. Check him out at http://www.redshoefilm.com View all posts by Brian Russell