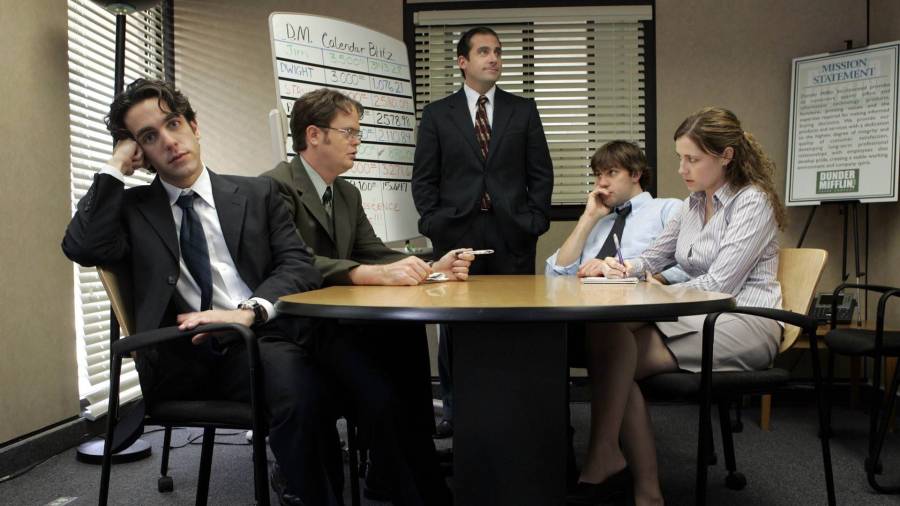 While I rewatched the show these last few months (rewatched it twice, I should clarify) I thought about this question a lot. Why has The Office achieved such universal love, fame, acclaim, and devotion? I can talk about the show pretty confidently with any person of my generation and expect them to more or less know it, even if they haven’t seen it as many times as I have. Our articles about it are some of our most popular. In my college apartment it was a decent bet at any given day someone in the house was streaming it. But why?

First thing first, it’s obviously a powerhouse of a show. Strong writing, strong performance, etc. But that’s not all – there have been shows like that before and since.

I’m not a social anthropologist guy, so much so that I’m not even sure that’s the right term for the investigation of this question. But I know my own history with the show, and that seems an equally good place as any to search for an answer to my question.

The first time I ever remember hearing about The Office was when my dad got home from a business trip. He described to us in detail an episode of a show he watched while on his flight – maybe it was a DVD, maybe it was an show provided as part of the flight. He was dying laughing on the plane, he said. They dropped a watermelon off a roof! I still remember, with utmost certainty, the episode he was describing was “Safety Training”. He gushed about the show, and my dad never gushed about any show (except Seinfeld, which he would howl at with laughter while watching reruns late at night, and the Honeymooners). I don’t know if he knew the name of The Office and if he told it to me I didn’t bother to retain it.

The first real time I was exposed to The Office must have been in early middle school. I had just gotten email and because I had nothing important to say to anyone on the internet my friends and I would mostly send back and forth Youtube videos (which, I’m sure, I was just being introduced to as well). The Office obviously isn’t the first show to do a cold open, but their cold opens were particularly apt for Youtube: again the solid writing came into play but they were also often self-contained, so you didn’t need to know the characters or the episode. They could stand on their own. So between repeated viewings of spiders on drugs I watched the cold open to “Back from Vacation”. I didn’t know who Andy was, but I thought his reading of “I am now chopping off Phyllis’ head with a chainsaw” was just about the funniest thing ever.

What Youtube provided was a way for me to be plugged in with these characters constantly. A precursor to Netflix streaming, it allowed for me to visit with them more than once a week, whenever I felt like.

It also made me want to watch the show. I already knew the excitement of waiting for a new installment of shows, being a veteran Yu-Gi-Oh, Pokemon, and Naruto fan. But I probably didn’t seriously consider programming until The Office. Again it was aided by time and place: the Thursday Night Comedy Block on NBC was a formidable two hours of comedy, especially in the years The Office, 30 Rock, Community and Parks and Rec teamed up. There was nothing I was more excited for, and watching a show roll out and talking to my friends about it the next day was a totally new experience to me, replicated only by Lost a few years down the line. It was something I knew landed on Thursdays, and unlike my former love of Saturday morning cartoons (when I didn’t control my schedule) it was something I planned to do.

But most of these things have happened in the past. When I Love Lucy was on the air people would schedule work hours around it! Waiting anxiously for new episodes was new to me but not to the world. It was the internet, really, that changed things. First with Youtube, and then with Netflix.

It’s a little hard to imagine what my life would be like if Netflix streaming never came to be. I guess I’d probably still have cable. More importantly, I probably wouldn’t have watched The Office upwards of ten times (this is a conservative estimate, I’d say). Streaming makes it so easy to return to these characters whenever I feel like, and they probably would not occupy as much headspace if I didn’t see them so frequently. Just like Youtube allowed me to get to know them in little snippets, The Office has become comfort food to me (and many others). The ability to stream it came at just the right time: we wanted to see reruns, but it hadn’t quite lost its footing culturally yet. The Office was probably one of the first shows I seriously binged (although Arrested Development and… Season 1 of Dexter… take the prize of “first first”) and again it became in some ways synonymous with streaming for me, in the same way the cold opens are synonymous with my first days of Youtube. The characters are deep in my mind. I know what they sound like, I know everything they’ve said. I watch them to fall asleep or with friends or to have a laugh, and I think about them often enough I want, eventually, often, to revisit them again (and again).

And of course all of this is colored by the people in my life who watched it along with me, at every single one of these stages. They were just discovering Youtube videos when I was, and we’d all send them back and forth and recite them to each other. Friday mornings at school we’d riff on our favorite jokes from the Comedy Block the night before. Even binging The Office is a sort of ubiquitous experience I can discuss with many friends. The Office was entrenched in many people’s journey towards falling in love with television. Even the question of “why The Office” is shared. Why do we all keep returning to this show, even though we’ve seen it so many goddamn times. “I dunno!” we all say to each other cheerily.

2 thoughts on “Why Can’t I Stop Rewatching The Office?”