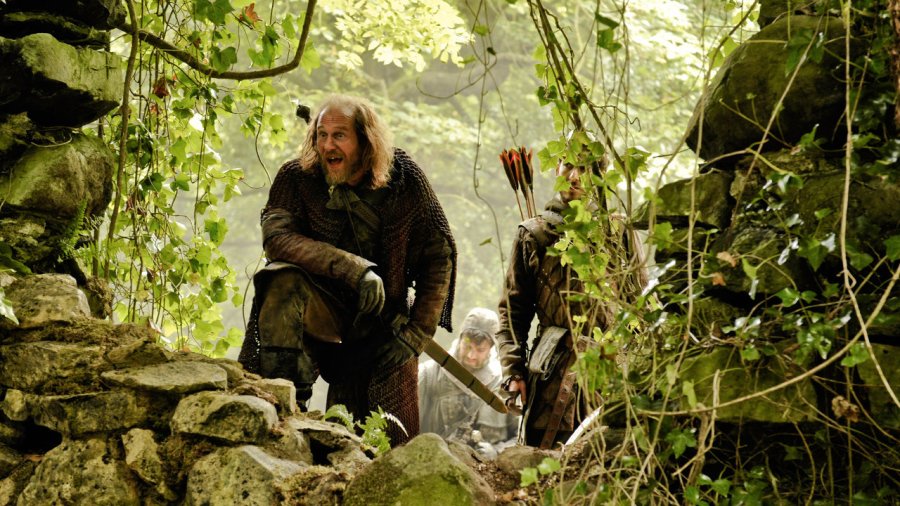 Spoilers for the books and the show (Game of Thrones, in the case you don’t recognize the name “Thoros of Myr”). Deal with it.

Let me get my snootiness out of the way right off the bat: I don’t actually watch Game of Thrones. I read the books (yeah, yeah). I did watch the first season, and some of the second, and tons of clips, and I read synopses of all the episodes (particularly now that they’ve bypassed the books – I know I’m technically ruining it for myself but 1. the internet would ruin it for me regardless, 2. I don’t think spoilers are what make or break a good story and 3. I really want to know what happens, damn it).

To be fair I thought it was a pretty good adaptation (the first season, at least). But I didn’t keep watching it for a few reasons. Tracking it down online was a huge pain in the butt. I’m actually 90% sure that I watched it on the actual HBOGo site, but the chemistry between the site and my computer never seemed to work out and the show was pixelated and laggy. Secondly, all told it was a faithful adaptation when I stopped watching, which was cool but I had already read the books.

I’ve got a whole speal on adaptation, and I’m often told I’m wrong, but it basically goes: “what’s the point?” Which isn’t to suggest there can’t be a good adaptation. It’s not a rhetorical “what’s the point?” but one looking for a good answer. My shining example, always, is The Shining (which, yes, King reportedly did not like but I didn’t like the book version of The Shining so I could care less). It feels like Kubrick read the book and filtered it through his mind, and delivered a different person’s reflections on the same themes. Alternatively, we have movies like It which, while good, don’t feel like any expansion on the novel. In those cases I ask again “what’s the point?” Often times people remind me that the point is for studios to make money, and for stories to be told. “But they’re already books,” I argue back, “a medium the original author chose consciously. Why not make new movies with new plots intended to be conveyed as movies, and leave books as books.” Then people say “because no one reads anymore,” and I am forced to concede the point.

Because I am a fickle and impossible person, when it comes to Game of Thrones I will be arguing the opposite point. While early installments adhere too closely to the books, failing the “what’s the point?” test they are, as I said, pretty good television. But the show played its hand early by including the amount of nudity it did. It’s not like Martin never includes sexual content in A Song of Ice and Fire, but nudity occurs far more frequently in the screen version, often with little narrative reason, to the point where you’re forced to ask “what is this is service of?” Given Martin’s source material, what part of it are you accentuating or commenting on with all this nudity? The answer, of course, is no part of it. Nudity drives viewership, it is a spectacle that only HBO could pull off, so they were like “yeah, rad dude, go for it.”

Which, roundaboutly, finally loops us back to Thoros of Myr. I’m not going to make the argument that the show should include the impossibly large cast of characters Martin has thought up. It wouldn’t be good television if it tried to – characters need to be combined, reimagined, and cut entirely. They can’t be as far flung for as long as they are in the books. You have a central cast and it can’t be of a hundred people who each get their own independent stories for four seasons. I get that, and it doesn’t bother me in the slightest.

Thoros of Myr, however, was included in show and that’s where things get complicated. In the show Thoros serves the same general narrative function he does in the books, and in the books his character is fascinating. We’re first introduced to him as Robert Baratheon’s drinking buddy, a guy with a cool flaming sword who we’re told is disillusioned with his religion, the Red Priests. Then he goes MIA for a while, after things fall apart. Next time we meet him he’s brought someone back from the dead, first accidently and then multiple times on purpose. It’s a power he actively doubted he possessed, and one he finds relatively horrific, but he still uses it for the good of the Kingdom. That’s a compelling story, compelling enough that I remember it, without doing any research, four years after I read the books. Martin doesn’t even draw a lot of attention to it. Thoros isn’t a major character in the books by any stretch of the imagination, but Martin gives us enough that Thoros feels like a complete character, even if we have to fill in his actual psychology ourselves.

The POV characters of the books limit what the reader is able to actually “see” but the show isn’t bound by those same rules. Why not play with that to expand minor characters? You can’t have a sprawling cast leaping all over the Kingdom, fine, but give us moments with characters we don’t see in the books. Devote ten or fifteen minutes to making Thoros memorable. One of the major reasons we care about the characters and conflicts in A Song of Ice and Fire is because the world feels filled with characters and scenarios we care about. Jamie, Arya, the Hound, Brienne, and the Brotherhood without Banners all spend a vast majority of both the third book and fourth wandering around the Riverlands, looking at the sheer damage their war has inflicted upon the people. We see the consequences, and we see the way these characters react to these consequences, making the story both vast and personal at the same time. We care because we know these are people worth caring about.

That’s why I think the show should focus on stories like Thoros of Myr. Tell about a man who has lost his faith and had it returned. Sure, he’s not a major player. But commit enough time to a minor player that we care when he dies. Most viewers I talked to, when Thoros died near the end of the most recent season, were (maybe) able to report to me that the guy with the flaming sword, no, not the one who died a few times… the other one… he died. That’s where I feel Game of Thrones fails The Shining test. Not because it makes minor changes, not because it cuts characters and reorganizes events, but because it ignores the more core important elements of A Song of Ice and Fire. It doesn’t create a world both intimate and vastly complex. When I hear people rave “you gotta see Hardhome, or Battle of the Bastards,” etc. it makes me even more certain that I don’t want to watch the show. “There are dragons.” Okay, yeah, sure. But if the season features a reuniting of all the Starks, an underbaked family feud, Brienne and the Hound reuniting, etc. and all anyone can talk about is how cool that dragon attack was, I sort of stop caring. I want to know about the people authorizing the attacks and reacting to the attacks – the attacks themselves are only powerful if they’re built into a timeline of people I care about.

You may think HBO is a real Sam-I-Am and GoT’s is Green Eggs and Ham and I really should just try it. You may think I’m not qualified to critique, having not really watched the whole show (who is qualified to critique things, anyway?). But at the end of the day I know they’re just spectacle, just fluff, and I can’t bring myself to do it when I’ve read their cousins with the actual filling. I’m not going to sit here and argue that A Song of Ice and Fire is a perfect book series. They’re sometimes boring. Yeah, they spend a lot of time in the Riverlands. But they’re full enough that I can sit on a porch with some friends argue over which ruler would best protect the interests of the starving people of Westeros, and who is going to best be able to repay the massive debt to the Iron Bank, and care enough about it that it’s genuinely fun to argue the different political aspects. And they’re intimate enough that I care about Thoros of Myr.

Which dragon died? Who knows. But there was a cool giant ice spear!

4 thoughts on “Thoros of Myr (Ramblings on Adaptation)”