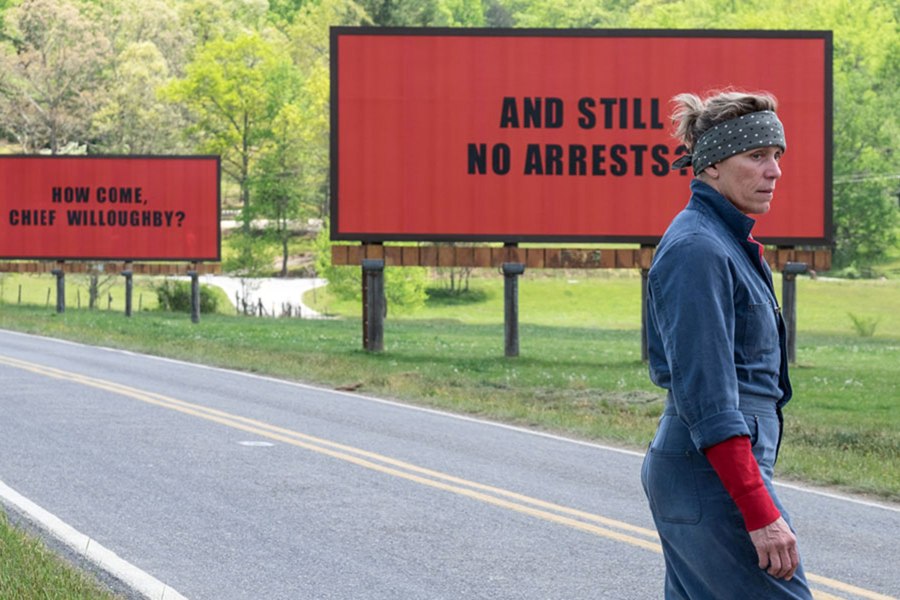 The season of award-hungry film releases has begun. A time when studios release movies they suspect will appeal to… whoever votes on major film awards. This, in theory, means the movies breaking through to the cineplex are better and more interesting than those released for the broader public the rest of the year. However some of these movies just pander to award audiences with sappy subject matter and cliches. Just because a movie is about poverty, racism, cancer, a historical figure, or an underdog who perseveres against all odds, doesn’t mean it’s necessarily a good movie. The subject matter of Three Billboards Outside Ebbing, Missouri seems hand picked from a list of “Top 10 Award Season Movie Cliches.” The film then proceeds to execute on these cliches with the subtlety of a… I don’t know, something absurdly unsubtle.

A grieving Mildred Hayes, (Frances McDormand) rents the titular three billboards on an abandoned road. They read, “Raped while dying,” “And still no arrests,” “How come, Chief Willoughby?” The stunt succeeds in getting the attention of the local police department, who Mildred feels hasn’t done enough to solve the case of her daughter’s violent death. It also lights up the town with controversy- most of them are against the billboards. In a comically soap-operay first act twist, Chief Willoughby (Woody Harrelson) reveals to Mildred he has *gasp* cancer. Boy, does that complicate things.

Mildred’s crusade is mostly a crutch to prop up a string of feel good moments, often involving righteous takedowns, be them verbal or physical. Many scenes are transparently constructed with the sole intent of teeing Mildred up for a no-BS, tell ‘em how it is monologue. In one scene a priest comes by the Hayes house and requests the billboards be taken down. Mildred then speaks for about 2 minutes straight about how the priest is culpable for child molestation in the Church. Boom roasted. The crowd goes wild (and in my theater, they did). But this speech has little connection to anything happening in the film, narratively or thematically. We know nothing about this Priest character, we’ve never seen him before and he never returns. So what is the point? We, the audience, feel good about Mildred and ourselves for being on her side. And so goes the entire film. Even more narratively integral scenes serve the same function- make the audience feel nice and chummy.

This pattern makes for an uncomfortable handling of race. The white characters are held up for their woke (and very obvious) hot takes on racist policing, but there are few fully developed black characters. Like many Oscar-bait films that deal with racism with kiddy gloves, to appeal to older white liberals who want to feel good about how not racist they are, the film neatly divides the good white people and the bad white people into their respective boxes of non-racist and racists, respectively. Officer Jason Dixon (Sam Rockwell) plays a blundering, moron of a crooked cop. He stumbles around like a Three Stooges character and reads comic books at his desk- he’s one donut away from being a literal sketch by a boardwalk caricature artist. His supreme unintelligence is almost used to explain his bigotry. Smarter, more moral characters are anti-racist. It creates a dichotomy- dumb equals racist, smart equals not racist. This allows the white audience, who presumably don’t see themselves as barely coherent morons, to identify as anti-racists. It ignores the nuance of how racism manifests in normal, seemingly intelligent people. These two types of white people make up pretty much the whole cast. The few characters of color are relegated to the background and small supporting roles.

All this bluntness is by design – it is a very stylized movie. But it plays as awkward. The film is elevated slightly, by the tremendous cast. Frances McDormand and Sam Rockwell disappear into their roles. Woody Harrelson is a convincing police Sheriff. Though sadly these master actors can only do so much.

I’ll also say this movie is never boring. I’ve been pretty hard on it thus far. I don’t think it’s the genuine “prestige picture” it sells itself as. But it’s enjoyable to watch, similar to how it is enjoyable to watch an episode of The OC.  Outrageous things keep happening. There’s like a three minute scene where Frances McDormand talks to a deer, like an absurdist rule-of-millions parody of that scene from Stand By Me. This dialogue happens between the Chief and his wife:

It’s still your turn to clean the horseshit outta the stable, y’know?

I’ll do it, you lazy bitch.

Is that from a play, “You got a real nice cock, Mr Willoughby?” I think I heard it in a Shakespeare one time.

It’s like a computer program generated this scene. (It’s made extra weird by the fact that Woody Harrelson is 20 years older than the woman playing his wife.) The film’s strangeness almost verges on surrealness. Fellow blog writer Chris Maher has pointed out to me that the writer-director Martin McDonagh started as a playwright, where heightened dialogue is more accepted. I can see a world where this style works in favor of a movie rather than against it. It is genuinely funny, and often on purpose. Many isolated moments that were genuinely affecting. McDonagh uses violence in a casual, cathartic way. It feels almost Looney Tune-esque, but with the added edge of real repercussions (blood, broken bones, scars). Perhaps I’d be more open to accepting the stylized dialogue if it were attached to a film with more interesting goals.

I give Three Billboards Outside Ebbing, Missouri 4 Billboards out of 10 Ebbing Missouris.