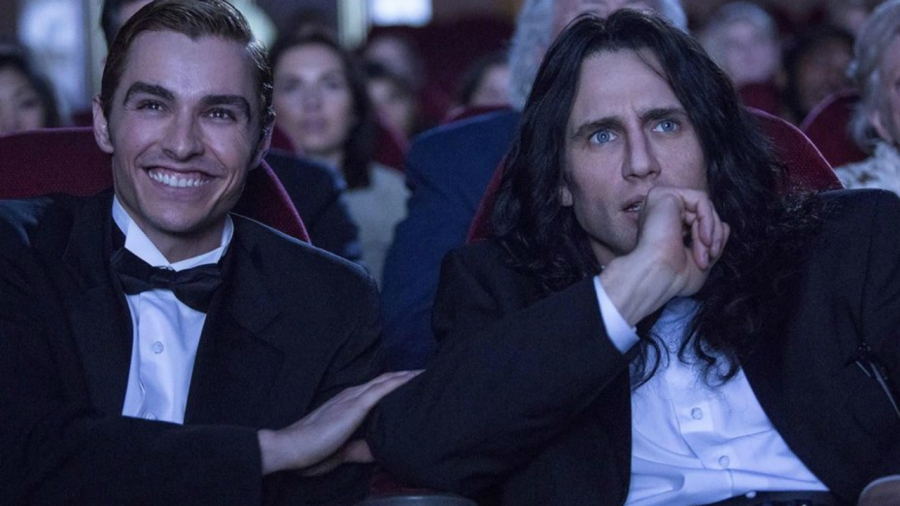 My premier viewing of Tommy Wiseau’s 2003 film The Room was transcendental, I was hooked. On that day, my fascination with “so bad it’s good” movies took off. Manos, Birdemic: Shock & Terror, and Troll 2 were quickly added to my bad film repertoire. In my freshman year of college I started a club on campus devoted to watching and riffing these movies. In 2013, Greg Sestero, who played the role of Mark in the room, wrote a book, The Disaster Artist, telling the story of The Room’s troubled production. I was enthralled at the opportunity to get a behind the scenes look at the “Masterpiece of crap” I had garnered a deep, passionate love for.

The Disaster Artist chronicles aspiring actor Greg Sestero (Dave Franco) and his friendship with Tommy Wiseau (James Franco) as they meet in San Francisco, move to LA, and eventually, make The Room.

The Disaster Artist plays almost like a greatest hits version of the book it’s based on, showing select moments and periods of time over Greg and Tommy’s friendship and The Room’s production. In fact, the filming of The Room doesn’t occur until almost an hour into the movie. The first third of the film follows the early stages of Greg and Tommy’s friendship, that, while containing some really great moments, like the pair loudly rehearsing a scene in a diner, it begins to drag as it goes on, seemingly unable to reveal anything new about our characters. They meet after an acting class where the timid and quiet Sestero is enthralled the Wiseau’s “performance” of a classic Tennessee Williams scene. Wiseau rolls around on the ground moaning and humping the air, something fans will immediately recognize from The Room’s climactic scene. It’s clear Franco (who in a weird parallel to The Room, produced, directed, and stars in this) wanted to leave little easter egg references to the film, but it almost comes off as if Tommy Wiseau, channeling Kaiser Soze, pulled bits of his film and identity from the world around him.

When the film finally gets to the conception of The Room, which is prompted by Sestero saying, “I wish we could make our own movie”, The Disaster Artist kicks into gear. Prior to this plot point, the film does little to make itself stand out from other “new guy in a new city” films. We are more of less subject to repeated beats of “Wow, isn’t Tommy strange” over and over again with minor variation. While, indeed Wiseau is fascinating to watch, it’s a relief to finally get to the main event. Watching James Franco play off of the baffled cast and crew of The Room (portrayed by a potpourri of surprisingly well known actors/comedians such as Paul Scheer, Nathan Fielder, Seth Rogen, Zac Efron, Josh Hutcherson and Hannibal Buress to name a few. There’s even a “Malcolm era” Bryan Cranston cameo) is a joy. Their confusing and bafflement at Wiseau’s eccentricity and bizzare directing style is a main source of comedy and gets funnier as their frustration grows. One of the films funniest scenes comes at Tommy is unable to get one line, the famous “Oh Hai Mark” line, right. We watch as the crew becomes more and more disheartened as he is unable to get the line, which he wrote for himself, right. The entire crew begins to recite the line in unison each time Wiseau requests it again. Their reaction to him finally getting it right is pure comedic gold.

James Franco’s Wiseau impression is surprisingly spot on. Sporting Wiseau’s iconic long black hair, sunglasses, and astounding amount of belts, he manages to nail the inflection and semantics, and embodies the man scarily well. It’s a bit of a shame, however, that his direction is somewhat weak. The narrative portion of the film is bookended by talking head style interviews of celebrities and directors discussion their admiration for The Room as well as footage from screenings with the actual Wiseau in attendance. These moments feel like they would be better suited for a documentary rather than the film they find themselves in. (There actually is a doc about The Room, called Room Full of Spoons, released in 2016)  The film has trouble deciding if it wants to make Tommy Wiseau a sympathetic character or show him as someone who is to be mocked for his eccentricities. Many scenes, including the aforementioned opening one, paint Tommy as this bizarre almost alien being, mining laughs from his oddities. However, these laughs are almost always at his expense. It’s as if the film is saying “Hey look at this freak.”  Sestero’s book, while never outright mean, paints him as a strange man and less as a victim of the industry. Other scenes portray Tommy as downright inconsiderate and mean. The filming of one of the infamous sex scene gives the viewer a particularly brutal portrayal of Wiseau as he belittles and hurls misogynistic insults at the actress playing his “future wife” Lisa. These scenes of Tommy’s are often juxtaposed with with scenes that try to humanize him.We watch as the crewmembers mock and belittle Tommy behind his back, unaware they are being watched. In one particularly disheartening scene, Tommy hides tears at the premier of The Room as the audience laughs and mocks his passion project. Scene like these make it seem as if Disaster Artist is almost shaming us for mocking Wiseau and it would have greater effect if the film hadn’t done just that moments before.

Despite its faults, it is clear that the people behind The Disaster Artist truly do love The Room and want to give it the tribute it deserves. Franco, Franco, and others give it their all and, for the most part, manage to capture the insanity that was the set of “the worst film ever made”. Fans of The Room should, for the most part, be pleased to see this cult classic get the mainstream notice it deserves, even if there was “Room” for improvement.

I give The Disaster Artist 8 “Oh Hai Marks” out of 10 Naked James Francos.

Walker is an aspiring writer and real Panera associate who currently finds himself living in Los Angeles. He graduated from Ithaca College in 2016 with a B.S in Television-Radio. Sometimes he tweets funny things at @thewalkerdw View all posts by Walker Dowd-Whipple