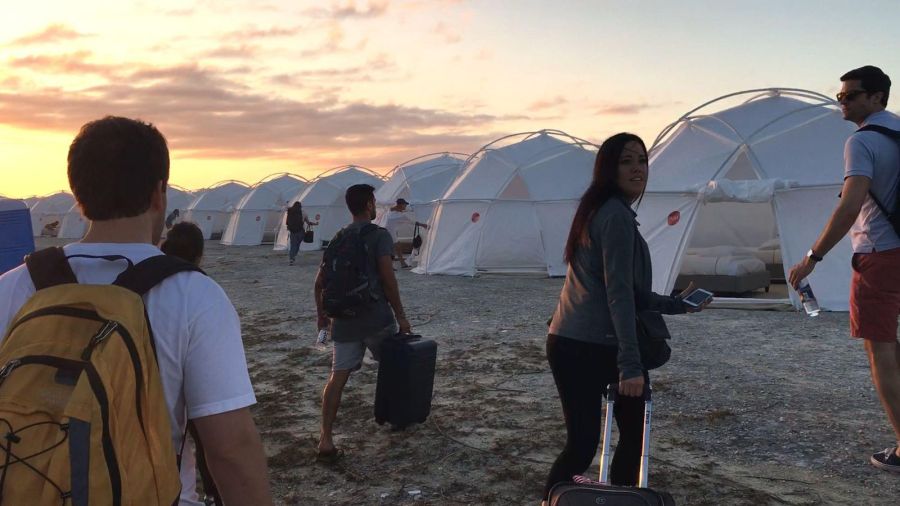 About a week ago a regular came into my shop and told me he had just seen the Hulu’s Fyre Fraud, and was currently on his way to watch the Netflix iteration on the big screen. After mentioning my interest in it I said something along the lines of “I imagine it’s just a series of small bad decisions to snowball.” He informed me that wasn’t the case, not at all. It turns out that, as with every story I think I know the general contours of (see: The People V. O.J. Simpson, either season of Slow Burn) I actually don’t know jack squat.

I deliberately only watched the Netflix documentary, FYRE: The Greatest Party That Never Happened, as most articles I’ve read have been mostly a comparison of the two, and I wanted to avoid that. Still, there is one comparison that needs to be made: the Hulu Fyre Fraud documentary features an interview with Fyre organizer Billy McFarland, while Netflix’s does not. Hulu reportedly paid for the interview, while Netflix refused to, seeing as it would be McFarland would receive more money from his massive fraud (it’s also worth noting Netflix muddied it’s “higher road” argument by having Jerry Media, the company in charge of marketing Fyre Festival, produce their own effort, but more on that later). It’s probably the right ethical decision to refuse an interview with McFarland, one that they’d pay for at least, but it’s something that’s noticeably lacking in the documentary, and as a result the whole thing is

While I support the ethical decision to not interview McFarland, it does create a bit of a black hole feeling at the center of the documentary. We’re given a window into the people who the black hole drags down, aka the other organizers, while the black hole itself remains impenetrable. We are forced to take McFarland’s co-workers’ word for how he dragged them all down, and it’s hard to say they’re strictly wrong, but there is also NO other account offered. Yes – a black hole is going to suck everything towards it, but you have to put yourself on a path of collision first.

That’s where the documentary is actually a little closer to my original, naive conception of a series of small mistakes snowballing. At dinner with a friend (a composer and lyricist) last night I equated all creative projects to running on water – it’s an impossible act and you have to trust the momentum because if things come crashing down you’re suddenly out in the middle of a body of water and you’re sinking. It’s Jesus walking on water – all it requires is the faith in the impossible. Tunnel vision is a curse, but it’s also the only way to accomplish what may seem like an insurmountable challenge. At one point an event organizer insists all festivals feel like they’re chaos, and things always come together in the end. This one felt like chaos and then fell apart. Where, exactly, does culpability come into play? The many interviewees all admit to varying degrees they eventually realized the event would be a disaster. It’s fair to say they share part of the blame, but it’s also easy to see that they didn’t see any clear exit. McFarland was a fraud who knew what he was doing. How much did these people know, and how much responsibility did they carry? When, exactly, do you jump ship? The night before, when the mattresses are soaked? Who does that help at that point?

The documentary suffers for not asking these questions, but at the same time it can’t ask these questions – Jerry Media is producing the doc, and beyond the questionable ethics of this decision it ties Netflix’s hands in a serious way. It’s unlikely Jerry Media is going to turn around and ask itself how much blame it shares for the fiasco, and as a result it can hardly challenge anyone else. The moment Jerry Media members arrive on the island and realize they can’t even find a car to take them to the festival feels legitimate, but it also comes off as a total excuse. They nudge up against challenging the others on their complicity, but it is disingenuous as they fail to recognize their own.

Because there was real human cost, both to the festival attendees and to the people of Great Exuma – mostly to the people of Great Exuma. The documentary does a good job of highlighting the economic devastation McFarland and crew brought to the island, working people for long hours and then disappearing before paying them. Intermediaries again place the blame squarely on McFarland, and a few flee fearing for their lives, but the question of responsibility again rears its head. Where in the chain of command is it reasonable to assign blame for this? The workers are well within their rights to be paid, and the people who hired them thought they would be paid. Is it naivety? Blindness? Purposeful ignorance?

All throughout the documentary I was left with one thought, which was a stupid one as things spiraled, but it also was one that made sense to me: if McFarland had pulled this off, he would have never been caught. It’s obvious: if it had been a success it wouldn’t have been a failure, but it still feels almost exhilarating imagining him getting away with it. If he had gotten the right money to the right places at the right time, it would still feel like he’d pulled a “fast one”. He just… doesn’t. But the sense that maybe he could have is what propels the documentary, because that irresponsible thrill is what reverberates out from him and infects everyone else. It’s suffused throughout the entire documentary, even if we’re missing its origin.

I give FYRE: The Greatest Party That Never Happened 7 hurricane tents out of ten soggy mattresses.