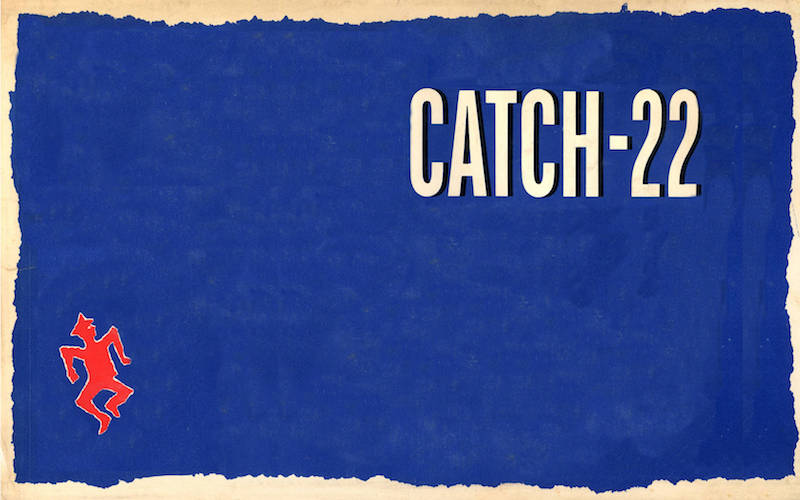 Catch-22 is almost without a doubt the book I’ve read the most times in my life (maybe I read some picture books more frequently when I was young, but even then I doubt it). If I had to wager, I’d say I’ve read it upward of ten times. The first time, I absolutely hated it. I recall driving somewhere with my family, reading it for summer reading, loudly denouncing it on the car ride. It was too confusing. There were so many flippin’ characters. It took place in no particular order, and stories often stopped half-way through to segway into something else. Character died and came back to life and died again. It read like someone trying to recall a story they could barely remember, or a story they didn’t want to remember, and they would get sidetracked by digressions… which, by the time I finished it the first time, I realized was exactly what it was meant to be. It’s so tightly plotted and so carefully crafted it feels like it has no structure at all. But the structure of the book is its most massive feat (along with its ability to swing freely and swiftly between surreal hilarity and harrowing reality).

It’s specifically this structure that makes it nearly impossible to adapt the story into a visual medium. It’d be false to say that there aren’t scenes in Catch-22 (there are, and they are frequently beautifully written and realized – take for example this surreal moment of combat: “The engines were howling again as though in pain, and the air inside the plane was acrid with the smell of machinery and fetid with the stench of gasoline. The next thing he knew, it was snowing!”) But novels, and the written word in general, can handle things differently than visual mediums, especially time, which is the bread and butter of Catch-22. Take for example one of my favorite reveals of the entire book. Chapter 10 starts with a single declarative sentence. “Clevinger was dead.” The scene follows, it doesn’t have to. You can make an entire death take up only three words. That’s the power of the written word. A flashback in a movie, if you want it contextualized, needs to take up at least the amount of time the series of events take. You can’t revisit scenes over and over again as you can in books. Declaring Clevinger dead and then circling back to it again in the next few sentences aren’t a retread in a book, but it is on the screen.

The other notable challenge is the way that the line recontextualizes what comes before it. Clevinger has appeared in numerous scenes up until this point (and he continues to appear afterward, in what aren’t strictly flashbacks because the book is, again, not told in any sort of order). Knowing that he dies, or knowing that some scenes actually take place after his death (characters occasionally demand that someone go “find Clevinger” – this, it turns out, is an allusion to his death (he disappears after flying into a cloud) and not actually a command to go literally find him on the base) change their context. In a book you can flip back and slot those scenes into different places. In a TV show, even though the rise of streaming makes it easier, things are generally linear.

It’s not that you can’t fragment a show. You can, and I hope they do, I really do. The book Catch-22 trusts its readers a lot, and demands a reread to actually understand. I’m willing to watch a show that only makes sense the second time through. Having a high expectation of an audience isn’t a crime. But setting anchors is much more difficult. The protagonist, Yossarian, visits the hospital many, many times throughout the novel, and a simple sentence at the beginning of a scene can help explain which time he’s in the hospital, and where he is emotionally. A show simply has a harder time setting it quickly, or dipping into a scene for a line or two before returning to the present. You can’t flashforward so easily to say “this person is dead” before returning to a scene with them in the present. How do you do that? I don’t know, and I fear it will become exclusively linear.

Full disclosure, Catch-22 is the only thing I’ve ever personally tried to adapt. I did it as a challenge to myself, because I thought it was an impossible project. For myself, I think I proved it was impossible. I don’t have to ability these screenwriters have, but even as I tried my best I was forced to flatten the story, to stretch wonderfully taut and intelligent sentences into scenes and to rearrange the flow of the novel, trying my best to leave it non-linear but still cutting it into “chunks” instead of dipping gleefully in and out of scenes. This is to say nothing of the tonal challenges I mentioned at the top. How can you make something both hilarious and horrific? I honestly don’t know. I feel that the distance a novel creates allows for it, and I’m not sure a show will. I’m afraid that it will careen either too fully into the horror, or too blithely into the comedy.

As with everything, and especially with this, I’m rooting for the adaptation to be good. I love this book, and if it can be a kick-ass show, awesome. But it’s such a great book, and uses the specific tools only books have to such tremendous results, that I fear adaptation is not a question of skill but a question of trying to fit a circle into a square. You can probably wedge it in there, if you really try, but it’s never going to fit perfectly and it’s going to look lumpy and misshapen, and it’s best parts are going to be flattened out. In short, the mere act of translation strips the story of something essential, if difficult to qualify. I hope I’m wrong.