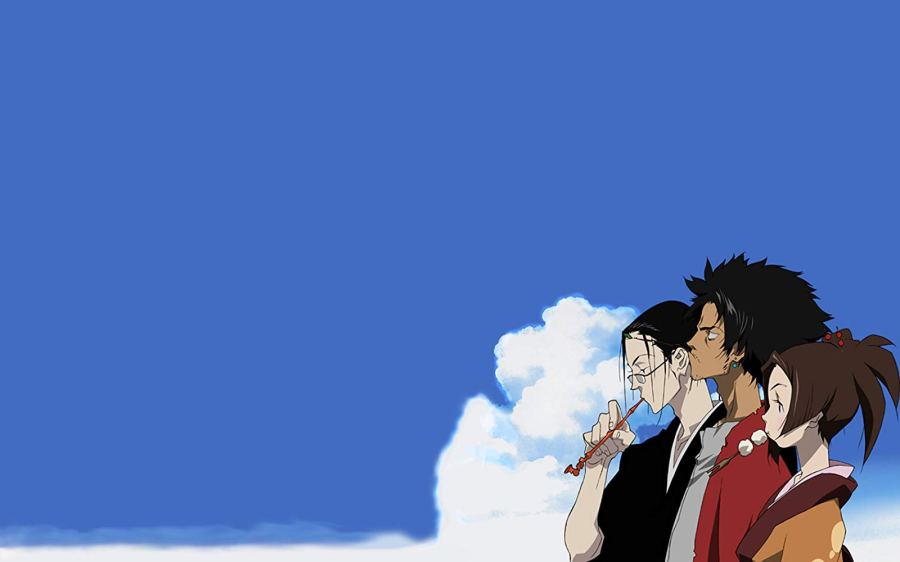 I’ve long said Samurai Champloo is one of the best episodic TV shows of all time. I’d rank it higher, even, than it’s cousin, Cowboy Bebop. As much as I love Ed I think they pull away some time that could have and should have been spent on the main cast (Ed is brought in too late and leaves too early to qualify as main). There’s also the possibility that watching Champloo first made me favor it, since the two shows share an enormous about of DNA, especially in what makes them work. It seems paradoxical that a show that is (nearly) all serialized should have such an emotional ending, and that we should be so invested in the characters’ arcs. But in both cases (Champloo, Bebop) we are, and for the same reason.

First, let’s lay out why the series and its serialization shouldn’t work so well as a cohesive whole:

The set up of nearly every Champloo episode is the same (and, again, Bebop shares the structure nearly exactly). The crew has arrived in a new town. They are hungry, but they have no money, and develop either a scheme or various schemes on how to get it. These schemes cause them to become embroiled in the lives of a person or persons in the town. By the end of the episode, the gang has usually secured money, or food, or untangled themselves from the mess they’ve made, and very, very occasionally they get a hint of where they should go next. They leave.

Episodes can be sorted into two categories. In either case, the characters are separated for nearly the entirety of the episode. In one kind of episode, one character takes control of the plot. Jin meets a tragic woman. Mugen meets a warrior he feels compelled to defeat. Fuu investigates a thief with a heart of gold. The two protagonists who don’t take the lead story serve as a peanut gallery, musing about the episode’s lead character, and in later installments serving as counsel and encouragement, albeit reservedly. In the second type of episode the characters still split up, but each pursue a storyline that eventually converges with the others. In this case the characters, upon reconvening, are frequently at odds with each other, and hash it out. It’s exceptionally rare for the characters to spend a large amount of screentime together. It should make them feel like they don’t know each other. That they are three characters sharing three adjacent shows that happen to be interwoven. Yet that’s not the case at all. By the end of the show they feel like they have truly bonded. That they are one cohesive group, and that their interconnectedness, their begrudging respect and subtle love, is the whole point of the show. Why?

That’s what blew me away so much the first time I watched Samurai Champloo. With such scattered stories, so few episodes, and so much focus on the guest character of the week (who is frequently the one actually driving the plot) the three protagonists shouldn’t feel fleshed-out, and especially shouldn’t feel like they care about each other by the end. But they do! You’re incredibly fond of them, and they’re incredibly fond of each other.

It’s obvious why we’re fond of them. Though we haven’t had the chance to see them interact with each other much, we have been able to see how each of them approach a number of situations. By the end of the show each of them has had three or four episodes focused on their past and reputation, and we’ve come to understand them. Furthermore, we’ve seen how they behave. The stories they involve themselves in, and how they deal with the consequences of their actions, allows us to evaluate what values they hold, and what skills they bring to the table to uphold those values. By making the stakes high but simple (they need food) the entirety of the focus is turned towards character.

Better still, we’ve seen them deal with the same general problem (hunger, need of food) in various ways. We know how, faced with the same problem, they will approach it differently. In short, they all feel specific, and authentic, and it makes us feel like we know them.

What makes it work as a whole, though?

The building of a group dynamic is subtle, and it relies on our fondness of the characters, and the fact that a lot of time passes over the course of the show. Though we only view 26 adventures, each only a few days long, the show itself takes place over the span of months. The group travels together every day. We may see them split up frequently, but even if it’s only that they share a meal together every night, the collective experience is cumulative and large. It could feel like a cheat that their bonding happens off screen, but it doesn’t feel like a cheat. We believe they’ve started to see in each other the things we’ve begun to see in them. It’s done slowly, and methodically, but the way they interact in the moments they are together changes over the course of the show. By episode 10 they’re more likely to go out of their way to help each other or say a kind word than in episode 1. By episode 20 they’re pretty willing to lay down their lives for each other. The show’s philosophy is simple, and stated: you can’t travel that long with someone without knowing them, and it’s difficult to not care for someone you know that deeply. They may never say it, since they’re stoic, and rude, and grumpy, but they’ve somehow under the surface come to love each other as much as we love them.

Again: it shouldn’t work. They never discuss previous adventures. We, the audience, simply know they’ve been through a lot together. We know specifically what they’ve been through together. We know what they see in each other when they look under the surface, and we know why they respect what they find there. We’re asked to infer that being through a lot has created a bond. Leaving nearly all the emotional work and growth as subtext is a bold strategy, and it asks a lot of the audience. It shouldn’t work. But it does.