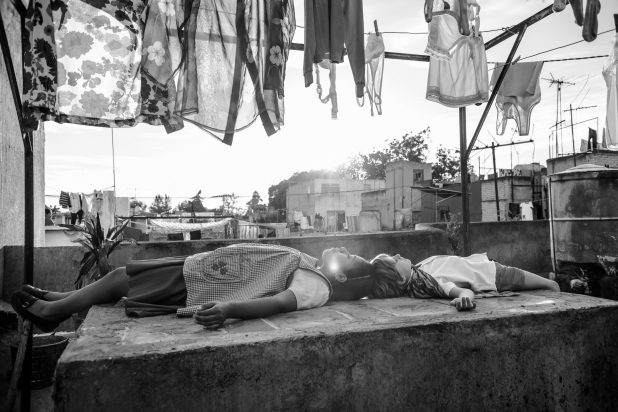 Roma begins with the sloshing of water over tiles. There are suds. In the reflection of the water, we see an opening to the sky flanked by walls – we are in a courtyard. Still in the reflection, a plane flies by, and we hear it’s distant rumble. Eventually, we learn we are in a driveway, belonging to the family of Sofia (Marina de Tavira) and Antonio (Fernando Grediaga). The woman cleaning the driveway is Cleo (Yalitza Aparicio) a maid who lives in a second house out back. The driveway must be constantly cleaned because Borras (a dog) is constantly pooping all over it.

Describing the opening in minute detail is true to the spirit of the movie, which is beautiful but also meticulous, slowly drawing the viewer into the world of Mexico in the early 1970s, and particularly the daily rhythms of the house. Director/Writer/Cinematographer/Editor Alfonso Cuarón relies on his signature longshots to familiarize the audience with the house’s layout, so that we quickly begin to feel we live there too. I’d be hard pressed to think of a film that more economically draws you into the domestic patterns of a family – their relations, their daily routine, and their home. Early in the film Antonio gets home early from work and the children (Sofia and Antonio have three sons and a daughter) watch as he attempts to navigate the wide Galaxy into the narrow driveway while Adela (Nancy Garcia), the other maid holds back Borras, something the family must do whenever they open the front door. It all feels so immediately lived in, and the film is able to return to this well of “parking the car” many times over to investigate what changes and what stays the same.

And change is inevitable, because it’s what makes narrative thrive, and as soon as Cuarón establishes routine he yanks it away. There’s not really a plot, per say, but a loose configuration of memories hung together around two central threads (stop reading here if you want to avoid all spoilers – the film has so little conventional plot it feels particularly criminal to give anything away, even though both changes listed below happen relatively early in the film… okay, last chance…) – a major shift in the family as Antonio abandons Sofia and the children, and a major shift in Cleo’s personal life as she becomes pregnant. The film focuses on both of these threads, but they play out almost in the periphery of the action. Most scenes feel like well-loved but scattered memories, not exactly building momentum in a narrative sense but focusing instead on an emotional accretion. It’s not exactly a nostalgic look at the time, because it lacks cloying sentimentality. Instead, I’m forced to return to the word I used so frequently above: it’s about a world at a time. It’s about the world of Mexico, early 1970s, and also about a smaller world, the family, of which Cleo is part of, and it’s about even smaller worlds too, the world of Cleo and the world of Sofia and the world of the children.

I don’t want to minimize the character work here, because every character is incredibly well realized, but like his previous films (Children of Men feels echoed throughout the film both in some of the longshots navigating through space, shocking violence, and sense of society shaping the more personal realm) the lack of conventional narrative causes the arc of the film to be about a time of upheaval and tumult of a gestalt – the family. Characters do evolve, and they all feel like they do have interior lives, but they exist most concretely in their relationships to each other. We generally feel that movies focus on people, because they’re what we see on the screen. Recognition and bonds are invisible, but they shape our world maybe even more than the people that form them. For that reason the more I sit with the film the more the moments that originally felt out of place feel like an essential part of a whole. About halfway through the film, at a New Years party at a villa, a fire breaks out in the woods (it is, it should be noted, absolutely beautifully shot especially in the stark black and white, and the shot that introduces the fire – an ink black sky slowly filling with the haze of embers and light – is indelible). Few of the characters we’ve seen throughout the film are actively visible in fighting the fire – they’re lost in the crowd of their friends and family members. But the moment is something that unites them, a shared memory they will all be able to return to. In that period of familial upheaval it’s a memory of unity.

By virtue of Netflix desperately wanting awards for it, I was able to see Roma in a theater. Much of the work of establishing the world falls to the deft narrative mechanisms, of the shared focus on individual, family, and society, but the technical aspects of the film lift an enormous amount of the weight as well, and are strong endorsements to go see the film in theaters. The fire scene mentioned above is stunning, as are a number of wonderful scenes that take place in and around a theater. The chaos of being stuck in traffic at a bad time is sold with blaring horns and lights. Waves crash loudly onto a beach. While leaving the theater my roommate Gavin commented on the scene, noting that the waves themselves don’t look that threatening, but the thundering sound sells them as a real danger. The sound and visuals add a further sense of subjectivity. Once more, it feels as if you are there, or that you once were there, not that you’re just observing someone else’s memory but that these are memories you just happened to forget, a world you once lived in. It’s not the house that matters, but the memory of how you navigated it. It’s not who the characters were in that moment, but the feelings they generated. Everything is at once intimate, immediate, and foreign.

I give Roma 9 jumping dogs out of 10 trips to Montreal.