Shrek Retold is a scene-for-scene remake of Shrek (2001) with each scene made by a different artist in their own unique (often batshit) style. The whole affair was coordinated by filmmaker and Shrek fanatic Grant Duffrin (he also runs the annual event known as ShrekFest.) When questioned about the sincerity of his Shrek obsession, Duffrin says, “I have no idea if it’s possible to like something ironically. It’s like, could you enjoy ice cream ironically? Could you eat ice cream as a joke?”

This is a powerful and simple way of articulating something I’ve always had a hard time expressing. I was born in 1994, and grew up at a time when sarcasm and cynicism were an accelerating force in pop culture. Friends and Seinfeld were two of the biggest shows on television, both were fluent in sarcasm and dark irony. Then came a newer medium, sitting on the ledge between art and entertainment, that embraced irony even more intensely: memes.

Perhaps the best internet personality to describe our generations descent into irony for its own delightful sake is Seinfeld2000. Seinfeld2000 is a twitter account (and now a broader internet personality) that was born as parody of a different twitter account, SeinfeldToday. SeinfeldToday tweeted one line synopsis’s of speculative Seinfeld episodes that took place in the present. Seinfeld2000 was the equivalent of a child who repeats everything you say but in a stupider voice. It’s a deeply cynical and self-referencial take on a slightly more sincere and self-referential take on a cynical and self referencial TV show. On the internet yesterday’s (and today’s) media is devoured and repurposed. Sometimes it’s original meaning is distilled and magnified, sometimes it takes on new meaning all together.

In college my roommate (and blog contributor) Walker invented his own experiential meme: a holiday called Kazaamukkah. Every December we would watch the 1996 Shaquille O’Neal film Kazaam eight days in a row. We committed to this bit hard. I’ve practiced Kazaamukkah 4 times, and I’ve seen the film a total of 32 times. It was a self-flagellating joke of endurance. Walker and I were the only true completists, but many friends would stop by for a night or two. Many would roll their eyes and ask dumb questions like, “Why?” Um, because it’s a lot of fun.

Which gets back to Duffrin’s statement. When you love something “bad,” or appreciate something differently from how it was intended to be appreciated, people ask if you’re being ironic. This often comes off as an accusation. It’s code for, “You don’t really love that thing, right?” It’s cynicism about a perceived cynicism. This attitude assumes that the thing you like isn’t worthy of being liked on their merits. This puts down my taste, and it puts down the creator, alleging that their art is liked because of their failure. But when films considered “great art” come together through happenstance and mistakes (read: failure) it’s praised as a wonderful miracle. (There’s a whole documentary about the miraculous failure of Apocalypse Now.) But I sincerely love Kazaam, and sincerely love watching it 8 times in a row. I really love Batman & Robin, and The Room, and Scooby Doo 2: Monsters Unleashed, and Lizzie’s Way, and Venom. The joy I feel when I experience these movies is real joy. I’m not performing enjoyment to get a laugh from other people. You can’t eat ice cream as a joke. I think this outlook is key to understanding why Shrek Retold works so well. Over 200 artists contributed to this film, and nearly every installment plays as a loving tribute rather than cynical satirization.

My generation also came of age in a time when sampling, remixing, and self-reference was becoming mainstream. Hip hop was on the rise, and indie film was booming. People like Quentin Tarantino, Kevin Smith, and Amy Heckerling, were making movies dripping with open love, explicit references, and direct rips from the films they grew up on, especially the 70s and 80s flicks by the “film school generation.” Shrek came out in 2001, itself an irreverent send up to things that came before it. It took fairy tales, many popularized by Dreamworks’ competitor Disney, and mashed them all into one crazy world laden with modern pop culture references, fart jokes, and innuendos.

Shrek was made in an extremely young medium. It’s only about the sixth fully CGI animated feature film. I remember being 7 years old and asking my dad…what is Shrek? How did they do that? It’s definitely not real people, and it’s definitely not normal cartoons…it looks kinda like Wallace and Gromit where I know they used clay…but not quite. He explained it was made with computers. I accepted the answer, but a mysteriousness remained. Understanding CGI wasn’t as intuitive as the tactile, common-sense magic of hand drawn animation and stop motion. Regardless of how it was made, it looked wonderfully weird. Retold recaptures the spirit of this elusive new medium. There’s a handful of live-action scenes, but the majority are animated with brain melting lo fi graphics. I may never experience the confused wonder of seeing Shrek at age 7 again, but the whiplash of psychedelic styles came very close to that mysterious, unexplainable magic. 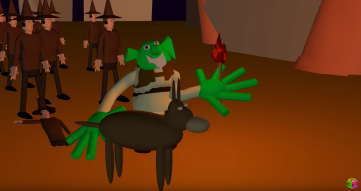 Shrek Retold takes all of these delightful elements of the original Shrek, the sampling and self-awareness, and the charmingly uncanny aesthetic, and it intensifies it. Like, a lot. With the mighty force of raw, unprocessed nostalgic love, channeled through the capable and creative hearts and minds of 200+ artists, Retold takes everything wonderful about the original Shrek and amplifies it a million times over. These people stretch Shrek to its absolute limit. They explode Shrek into smithereens, and put him back together again. That part is key: they put him back together. In every mind blowing moment of hallucinogenic imagery, abstract reinterpretation, and hand-crafted reenactment, you’re reminded that Shrek is a legitimately great movie, with a funny script and charming characters. Shrek Retold is one of my favorite films of 2018. I say that without a shred of irony.

I give Shrek Retold 9 gumdrop buttons out of 10 Smash Mouth hit singles.

2 thoughts on “Shrek Retold, and Respecting the True Love Behind Irony”