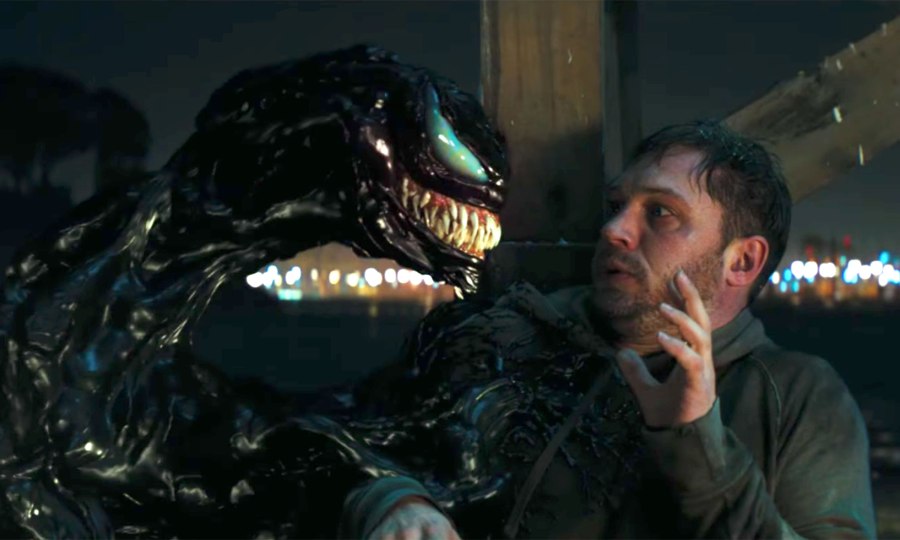 Venom was a movie that I had absolutely zero interest in seeing. Aside from a shockingly good cast there was no reason to expect anything from it. I rolled my eyes with everyone else at the trailer. Surely a mediocre shart that I didn’t need to see. But as the “mixed-to-negative” reactions started rolling in from press screenings Venom suddenly sounded…interesting. So I saw this movie with pitch perfect expectations: This is going to be bad, but it will not be boring. Check and check.

Eddie Brock is a hard hitting reporter with a video-based series where he gets to the facts about stuff, so a video montage tells us. He and his lawyer girlfriend (Michelle Williams, tragically underwritten) are happy in love, we know because they say so a bunch. Until Eddie snoops on her confidential lawyer emails to get a scoop Carlton Drake (Riz Ahmed, nailing it). Drake, a rich and powerful tech mogul, is rumored to be using homeless people as human guinea pigs. Anne’s emails confirm the rumor, and Eddie uses this information to gotcha-journalism Drake, which results in him getting fired and blacklisted. Anne gets fired too, and she dumps him. Understandably. Bad movies such as this are often marked by “smart” characters doing idiotic things. It doesn’t make sense that established, intelligent journalist would do something so dumb, would torpedo the trust of their closest friend and make an unverified accusation against an absurdly powerful person. But I don’t know. Established, intelligent professionals seem to do fucked up, self destructive, poorly thought out things all the time. Tom Hardy’s impulsivity and arrogant sense of invincibility makes it work. (Hardy’s performance does a lot of the heavy lifting throughout). Eddie pays the price, and the film refreshingly doesn’t paint him as a misunderstood victim. The film is extremely close to making a statement about entitlement and the abuse of status. However like a lot of Venom’s good ideas, there isn’t exactly follow-through. This would be arc ends with the first act.

Despite the poor ethic’s of Eddie’s scoop, it turns out to be completely true. One of Drake’s scientist underlings invites Eddie on a tour of the secret lab where they’ve been bonding alien goo to unwitting humans. The goo bonds with Eddie, imbuing him with superpowers, and they escape the facility.

There were hints of B-movie nuttiness in the first act, especially in Drake’s delicious mad scientist scenes. Those influences finally pick up in the second act when the alien goo, a “symbiote,” takes over Eddie’s body. Tom Hardy plays “losing his shit” brilliantly as he becomes a reluctant cannibal, constantly resisting the alien’s hunger for living flesh. The ever moving CGI slime is gorgeously animated, slithering around like an octopus covered in hot tar. When the CGI is bad, it’s charming, in a Mystery Science Theater kinda way. It reminds me of the primitive CGI in films I enjoyed as a child, like The Mummy Returns and Blade (GIFs below). In 2018 bad CGI is finally coming into its own, as the garbage we endured in the late-90s and early-00s has now crystallized into positive associations; i.e. nostalgia.

Venom’s problem is that it’s not fully aware that these shlock elements are its strengths. It’s desperate for the polish and gravitas of 2008’s The Dark Knight when it should have the texture and grime of 1987’s RoboCop. Venom mined the wrong decade and the wrong aesthetic for inspiration.

Its faults are loud, its tone muddled, its writing thin. But strong performances and an absurdity lift it above the aggressively boring horde of Disney-Marvel films we’re subjected to thrice a year. With the proper expectations in place, Venom is a perfectly enjoyable piece of shit. Here’s to hoping the inevitable sequel leans into what worked.

One thought on “Venom could have been better by being worse”